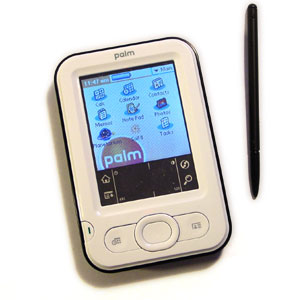 I knew the day would come. I knew one of these days I would slug my Visor Prism out of my ‘man purse’ and someone would say something awesomely sarcastic. Like – ‘Welcome to the 21st century dude…’ OR ‘Was your Apple II not small enough?’ The exact sarcasm was – ‘Woah, that thing is vintage!’

It was time to look for a new Palm.

I can appreciate the Swiss Army style PDA’s out there, BUT there comes a point when the tool is no longer useful for it’s original purpose. For example: Pliers are a handy tool. Screwdrivers are nice to have on you. So is a shovel and a hammer. How about a can opener and a lighter too! Now you have this shovel-hammer with pliers that pop out from the side and the head pops off to reveal four screwdrivers and a lighter. There is a sharp curled corner on the side of the shovel to open cans with. NONE of those tools is now anywhere near as effective as it’s original. You fill the lighter with dirt when shoveling. The screw drivers fall out when hammering and you look ridiculous trying to open soup with a giant shovel.

I don’t need, nor want a ‘phone – organizer – PDA – laptop – keyboard – bluetooth – camera – wifi – internet – mp3 player – memory stick reader – shovel.’ It’s too much! I mean – it’s certainly handy to have in a pinch, like on the Lost island or something, but it takes crappy pictures, you’re surfing the web with a 320X320 screen (that’s 20px bigger then this picture over here) and it’s costing you $60 a month in phone and digital minutes. I dunno, it’s not for me.

I picked up a new Palm Z22. Unfortunately, it too was not without compromise. For starters, they have replaced Graffiti with the new and improved, recently patentable, continually copyrightable, Graffiti 2. It sucks. I’ll let my meta tags and key words be clear here – Graffiti 2 is a bowl of suck. I spent 0.001 seconds learning to cross my T’s before looking for an overlay.

There was a trick where you could beam Graffiti 1 from an old PDA, writing over the current Graffiti 2, but it doesn’t seem to work with the Z22. I tried for about 3 hours. In the end, Teal Script works fine. You drop it on and think about paying $30 for it… The nag screen is only in the program, so unless you insist on tweaking every character, you’ll never see it. I’m waiting for an overwrite from Palm. They have received hate mail over Graffiti 2.

Now to the good stuff. It’s small, light, and fits into a wallet size man bag.

Christine calls it the ‘pouchette.’ Very masculine. Take a look at the size difference here: It makes the visor LOOK like an Apple II. The nav buttons are easy to use, but make older games harder to play. Tons of memory. Pictures and backgrounds are easy to load with SplashPhoto (included). It’s a one stop charge and sync USB connector on the top, and it does everything my Visor did. Dates, To-Do’s, Address Book, Memos. The included ‘day viewer’ is nice, but it was easily replaced with my current favorite – Whatzup.

So, for $99 I’ve retired the brick. I’ll add it to my 20th century computer technology collection. It will charge on it’s base quietly next to my PowerPC and my Zenith 286 Laptop. Rewarded for it’s years of hard service getting crushed in my front pocket.

Small update: Visor Prisim spelled Visor Prism. It appears the spell check got away from me.